This Vegan Anmitsu is the perfect colourful and refreshing summer treat. It consists of:

…all topped off with some sticky date syrup! 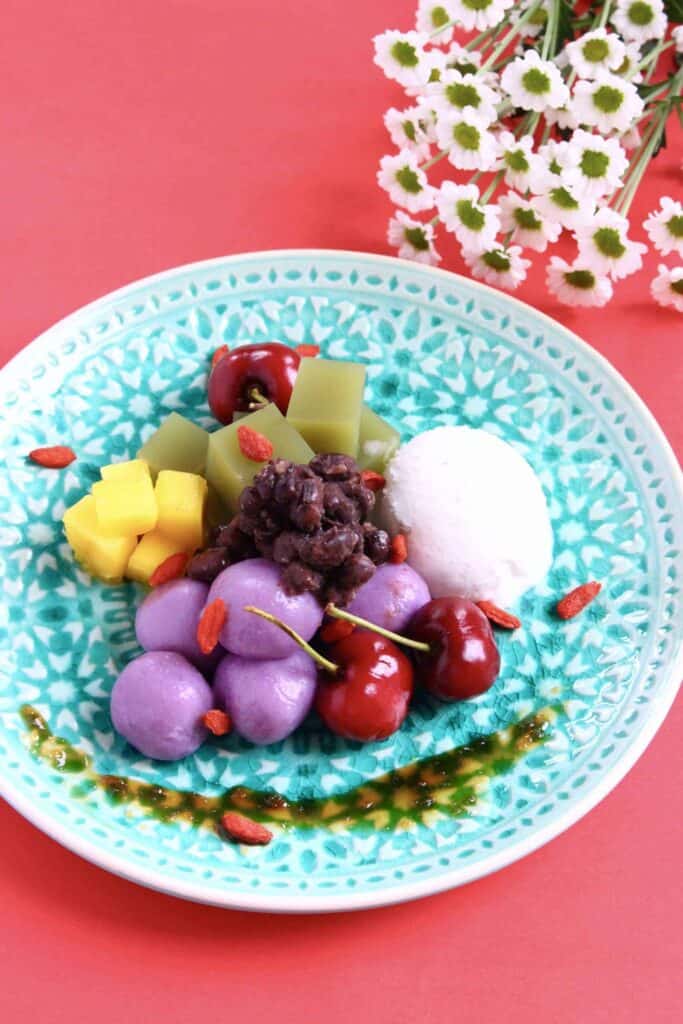 Anmitsu is a traditional Japanese dessert, which consists of cubes of jelly served in a bowl with sweet adzuki (red bean) paste, fresh fruit, little balls of mochi and ice cream, all drizzled with a black syrup called kuromitsu.

The version I’ve made here is healthier than its more traditional counterpart, as it’s naturally sweetened. It also happens to be vegan and gluten-free.

This dessert might look quite complicated as there are so many different elements to it, but it’s honestly pretty easy to put together as everything can be made in advance and can keep in the fridge for up to a few days.

So you just need to make the different components and then assemble them when you’re ready to eat. 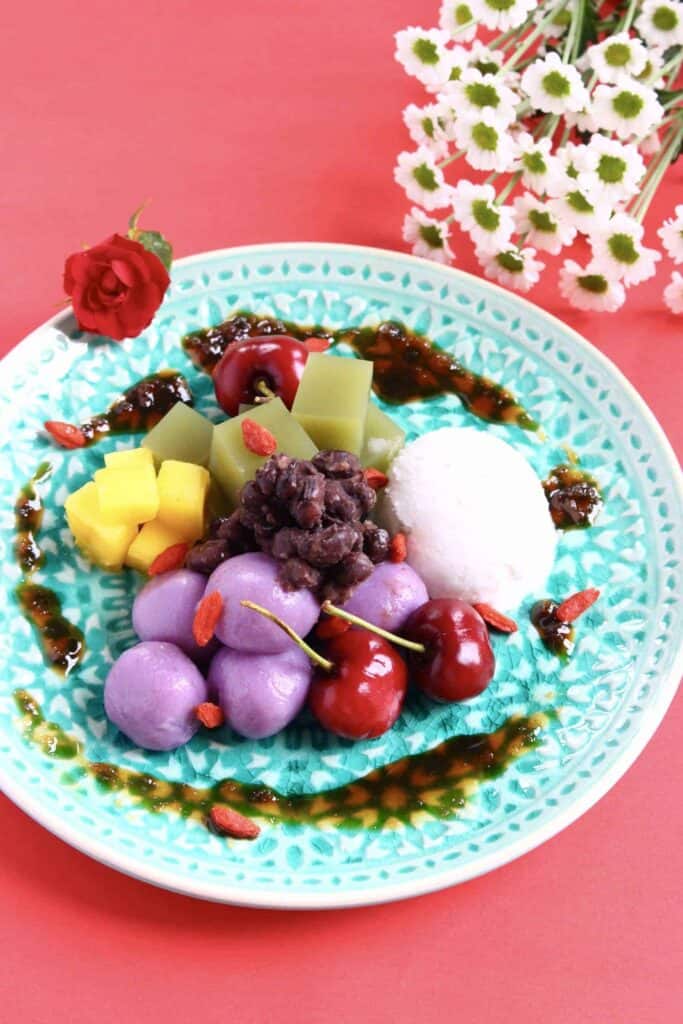 Now let’s go through all the different steps.

Let’s start with the matcha jelly. In Japan, jelly is traditionally made with agar, which is a natural jelly-like substance that comes from algae that grows in the sea.

It was first discovered in Japan in the 17th century, where it is known as kanten. It’s very healthy as it’s around 80% fibre, as well as being vegan-friendly, unlike gelatine.

You will be able to find agar flakes in most local health stores or Asian supermarkets, if not your local supermarket. 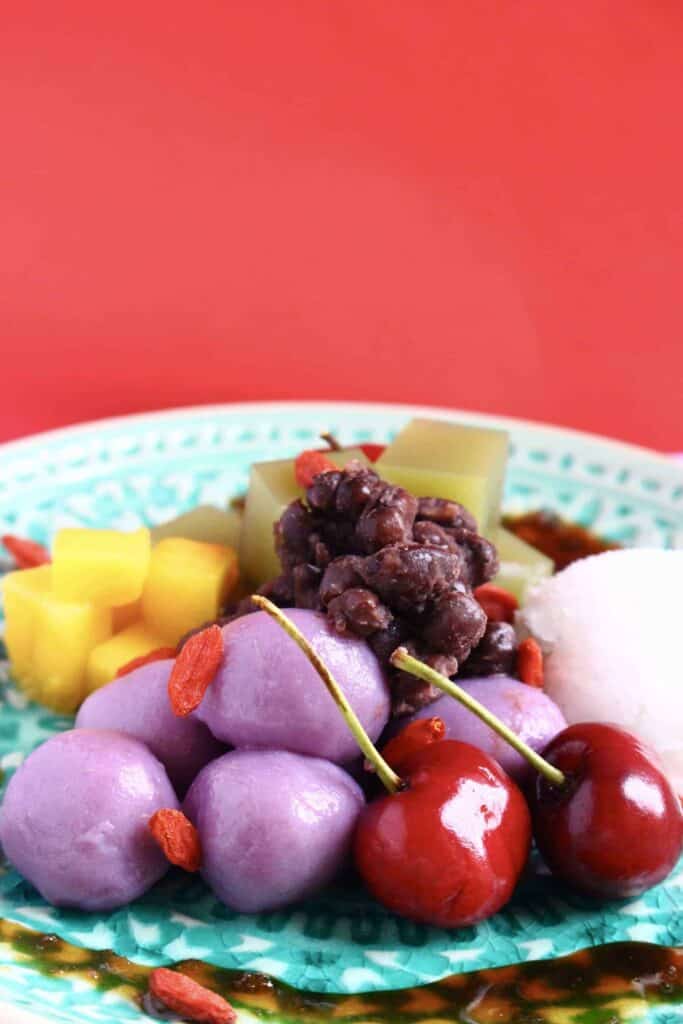 Although for anmitsu the cubes of jelly are usually made with fruit juice, I decided to make these ones here with matcha green tea, both for the beautiful colour as well as the delicious flavour!

Matcha powder also has the added benefit of being full of antioxidants and other such health benefits. You can buy matcha powder from local health stores or Asian supermarkets. 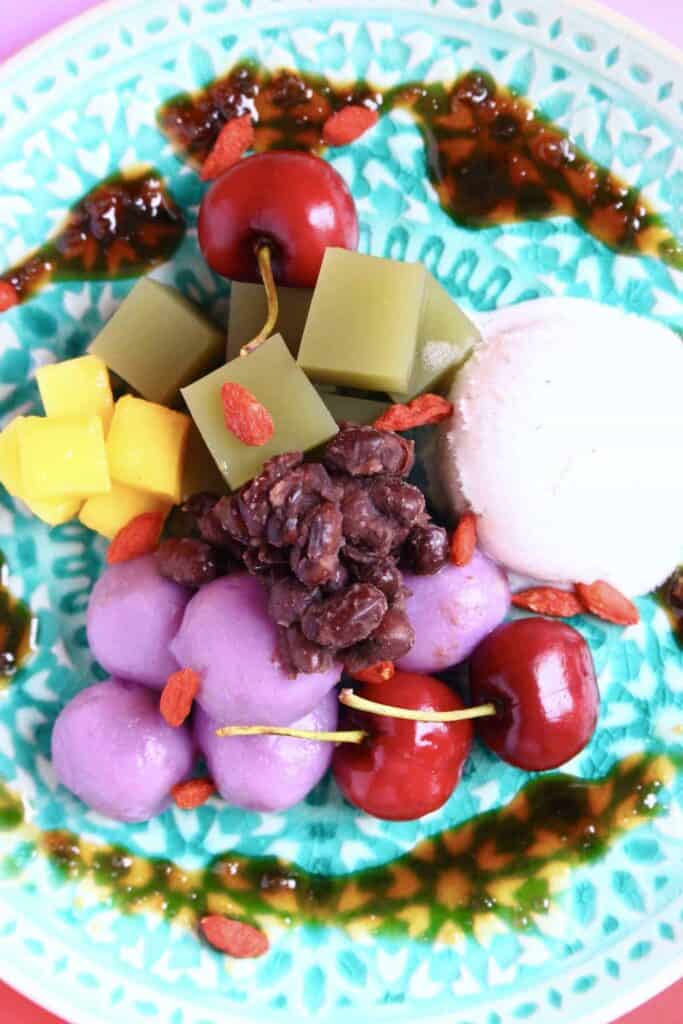 Next, the purple sweet potato mochi. Mochi is a Japanese rice cake made from glutinous rice (don’t worry, it’s still gluten-free, like normal rice) beaten into a sticky paste and moulded into shapes. 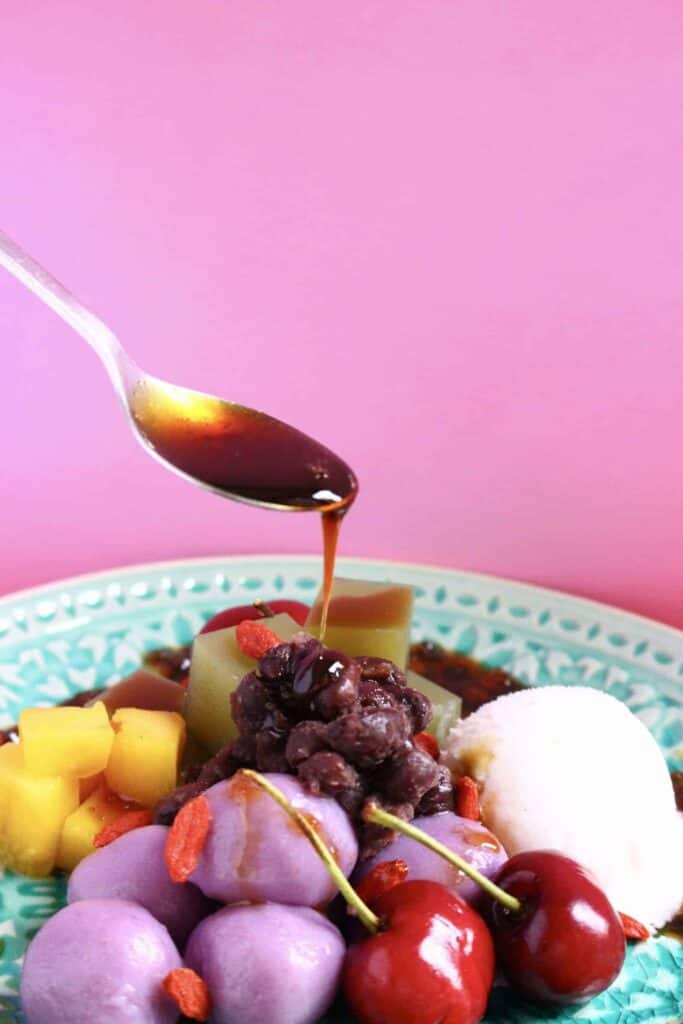 Although for anmitsu the mochi is usually plain, I decided to make it with purple sweet potatoes for extra flavour, aesthetic appeal and the added health benefits. And as the purple potatoes are naturally sweet there’s no need to add any sugar. 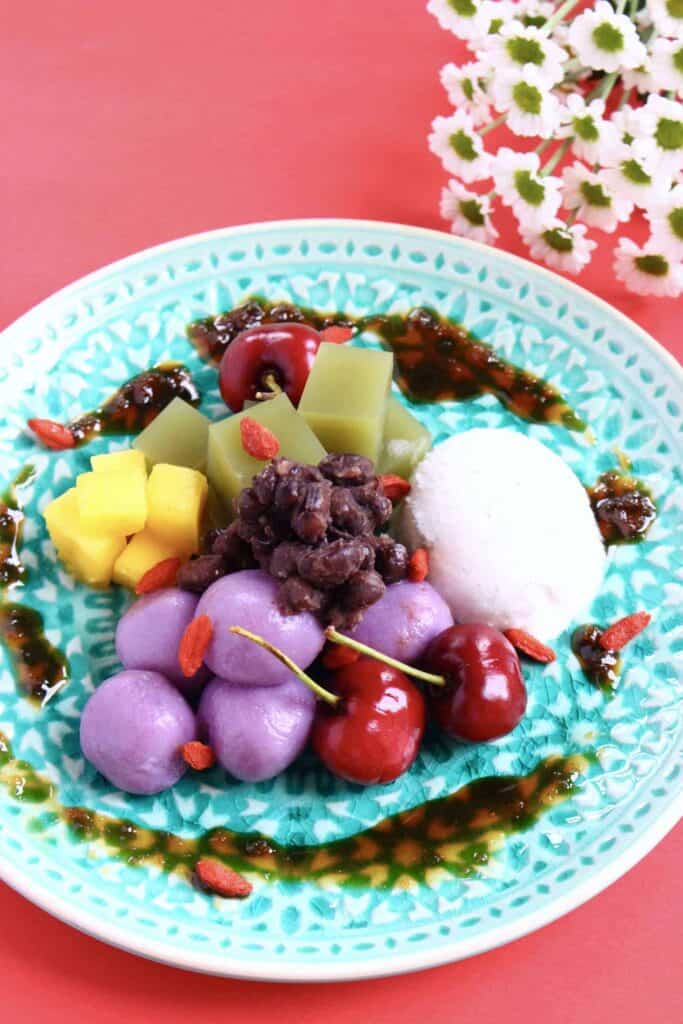 These little mochi balls may look pretty intimidating to make, but there’s no need to be scared of making mochi yourself (as long as you can get hold of glutinous rice flour, which you can buy in Asian supermarkets).

You don’t need to spend hours beating rice into a sticky paste as they traditionally do in Japan – just cook the sweet potatoes, add rice flour, mould into shapes and boil them for a few minutes. It’s basically like making gnocchi but with purple potatoes and rice flour. 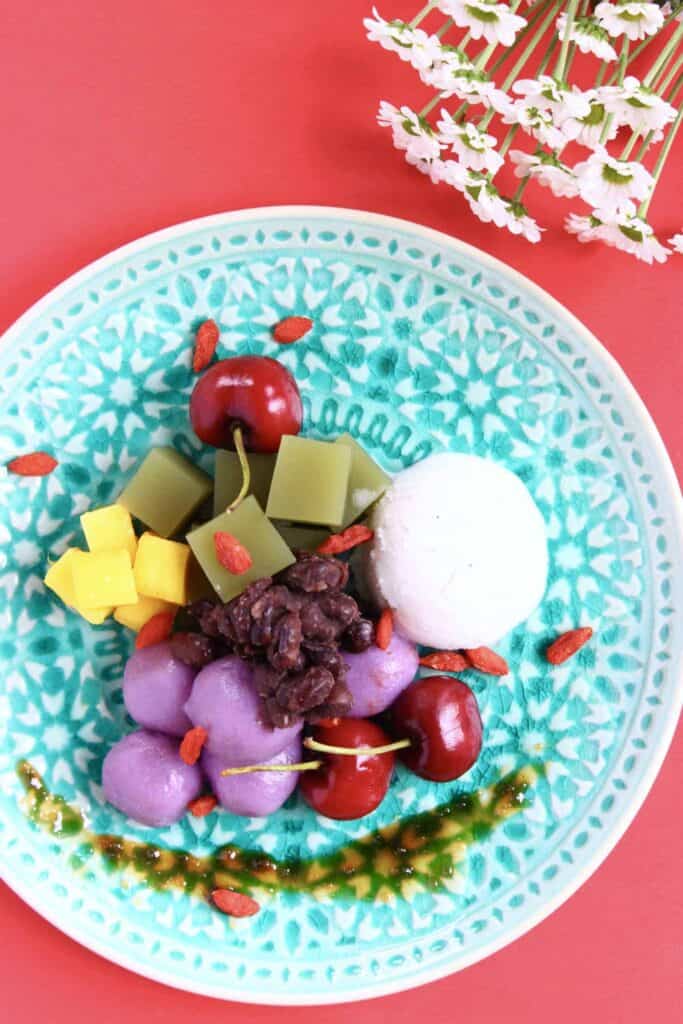 Next, you just need to mix together some tinned adzuki beans with a sweetener of choice and mash them slightly with a fork to get the right texture.

Adzuki beans are used in a lot of traditional Japanese desserts and inadvertently contain lots of health benefits too – they’re full of protein and fibre and some people even say they’re a superfood.

You can also add some fresh fruit – I went with mango and cherries, but you can use whatever you want. Strawberries, raspberries or even kiwi would all work well.

I like to top off this Vegan Anmitsu with some (dairy-free) vanilla ice cream. 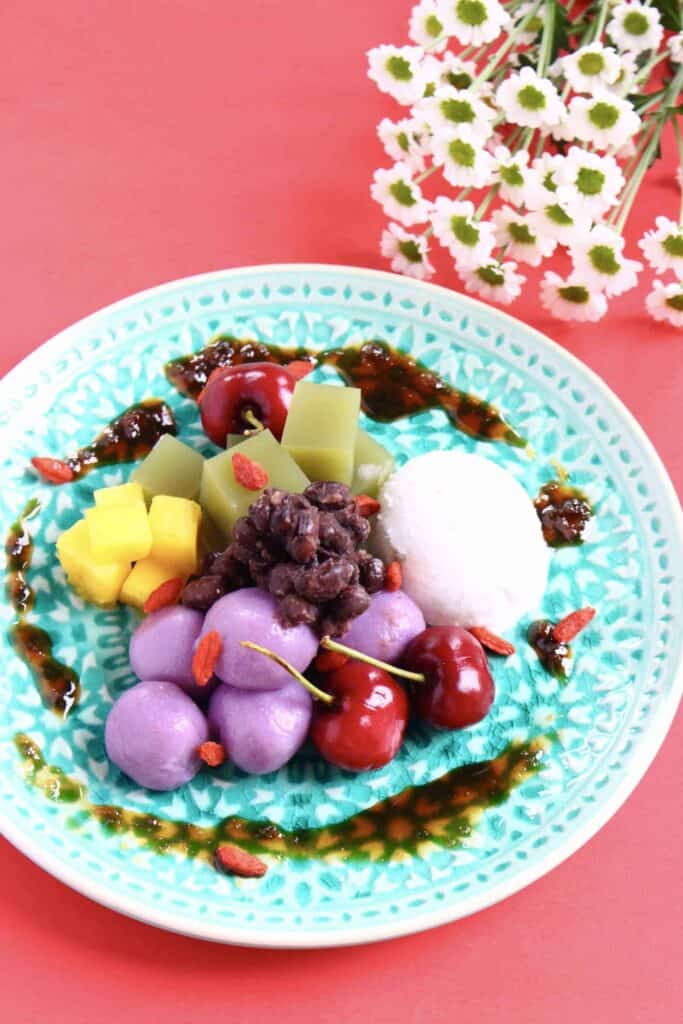 And finally, I like to drizzle over some date syrup, which is a great healthier substitute for kuromitsu (a Japanese sugar syrup that’s similar to molasses but milder and thinner). 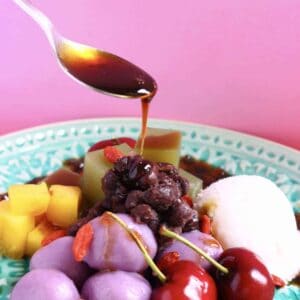 For the matcha jelly:

For the purple sweet potato mochi:

For the adzuki bean paste:

For the matcha jelly:

For the purple sweet potato mochi:

For the adzuki bean paste:

Nutrition Facts
Vegan Anmitsu (GF)
Amount Per Serving
Calories 220
* Percent Daily Values are based on a 2000 calorie diet.
Made the recipe?Tag @rhiansrecipes on instagram and use the hashtag #rhiansrecipes! 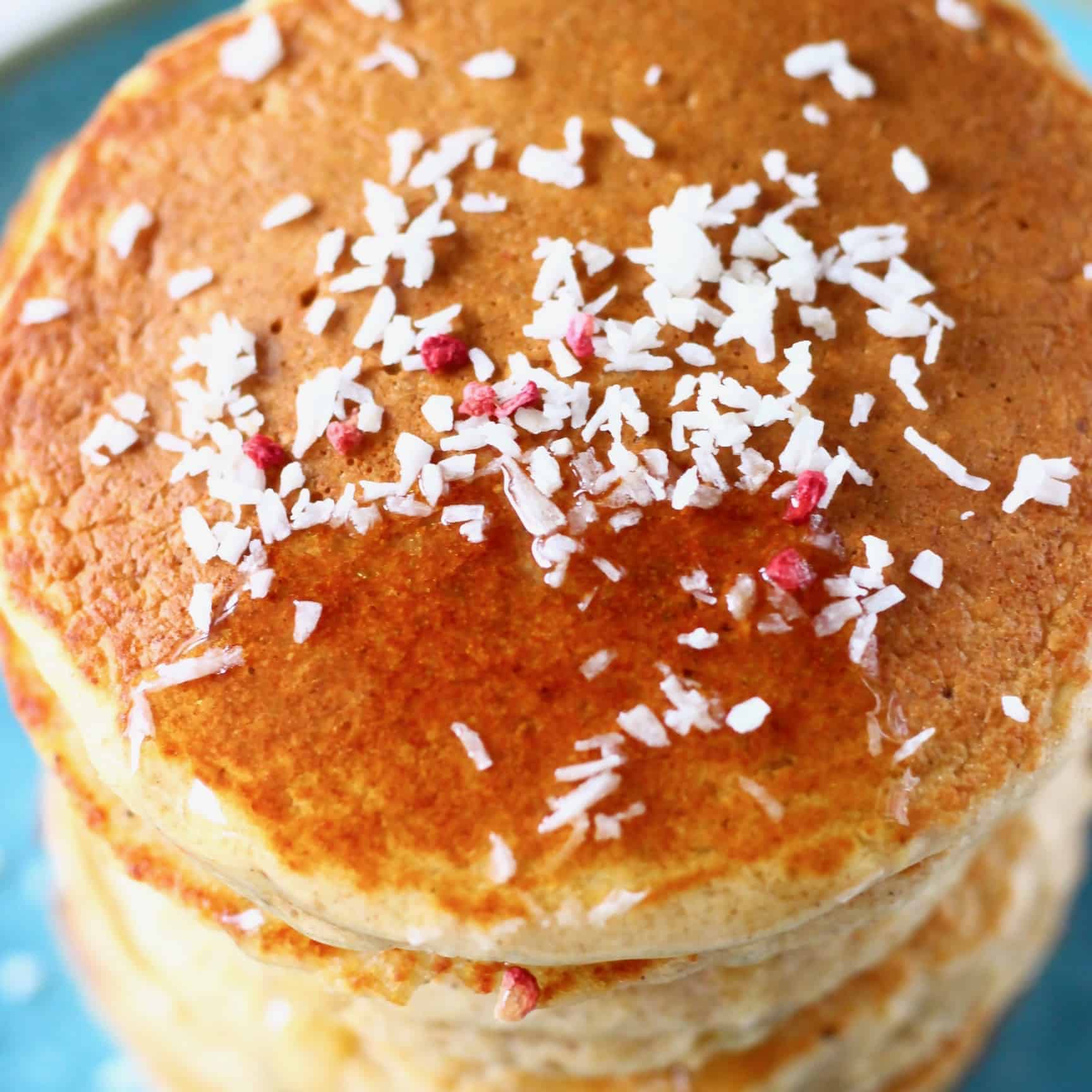 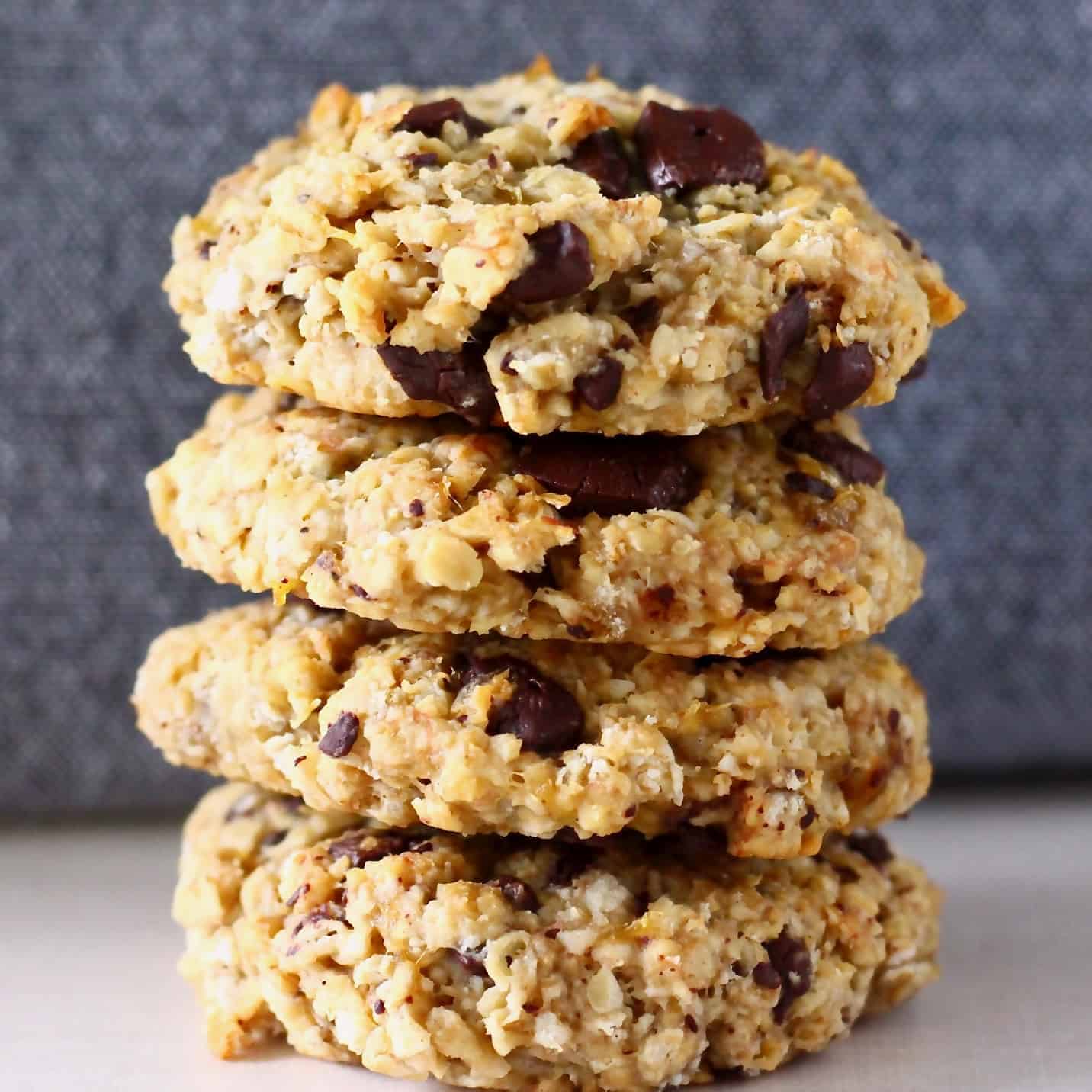